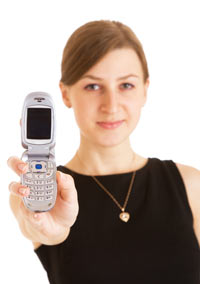 MySpace's popularity has become somewhat of a phenomenon since its debut in 2003, and the brains behind the site are still coming up with ways to attract new members and appease the existing ones. To answer rising demand, MySpace has gone to great lengths in order to make social networking available to users wherever they happen to be. That's right -- MySpace has gone mobile. In December 2006, MySpace announced that it was partnering with AT&T, formerly Cingular Wireless, in order to bring MySpace into the mobile world, and there are various service options available.

AT&T customers can elect to receive MySpace Mobile Alerts, which are SMS messages sent to a customer's phone when there are updates to his or her profile. Currently, the text messages are free from MySpace, but other costs depend on the user's carrier plan. AT&T Mobile subscribers can opt to pay $2.99 a month for the MySpace Mobile service, which, after downloading a Java application, allows users to upload photos, post and view blogs, view friends, send and receive e-mail and more. But don't think you're getting all of this for that flat rate. While the service is subscription-based, cell phone plan data rates also apply. For example, estimates show that uploading a photo from a 1.2 megapixel camera could cost as much as $1.50, so if you're on a budget, you'll want to keep that in mind. Myspace mobile service is also available on Helio brand devices. Helio, which is backed by EarthLink and SK Telecom, provides a custom application for using MySpace, and most of its plans cover unlimited data, so using MySpace comes at no extra charge.

Given that people today crave immediate gratification, it comes as no surprise that MySpace users want their alerts faster and easier. So, in order to keep its millions of users happy, MySpace officially launched its instant messenger function, MySpaceIM, on June 20, 2007, giving users another way to keep in touch with their friends. MySpaceIM, a downloadable program, incorporates chat into the user's experience. Before the introduction of MySpaceIM, MySpace users had to use other instant messenger functions, such as the popular AOL Instant Messenger (AIM), in order to satisfy their chatting needs, but now they won't have to.

MySpaceIM has a variety of functions, including an integrated music player, adjustable conversation views, custom backgrounds and avatars, plus a skinnable interface. You can import your friends list to MySpaceIM, which makes the transition fairly simple. It also allows you to send sound bites, called "zaps," to your friends. Avid users will most likely enjoy the one-click login and the instant alerts for messages, requests and comments.

Cerulean Studios, the company that developed instant messenger client Trillian, is supporting MySpaceIM with the release of Trillian Astra. MySpace is hoping to make MySpaceIM work as smoothly as possible, so it is also having a Pidgin plug-in developed for the new IM. It connects MySpaceIM to an IM library called libpurple, and it should help iron out any of the kinks found after the test launch. The requirements for running MySpaceIM are Microsoft Windows (98/2000/XP/Vista) and Internet Explorer 5.0 or higher.

While keeping up with your friends is key, MySpace also wants to help you keep up with important issues with the recent addition (as of 2007) of MySpace Impact. The section allows users -- both individuals and organizations -- to post information about different causes, which in turn spreads awareness and gains supports for those causes. Read on to find out how MySpace is making an impact.