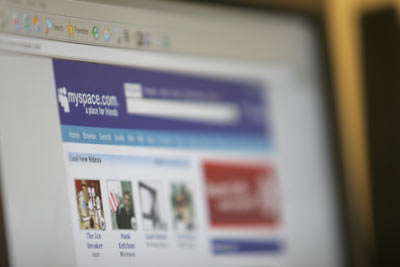 MySpaceTV is a video site that launched in June of 2007, which features user-generated content and other online video.
Nicholas Kamm/AFP/Getty Images

MySpace's video-sharing capabilities have helped make the site the social-networking giant that it is today. And in June 2007, MySpace launched an improved video site called MySpaceTV.com. It is an international site that is available in 15 countries and seven languages. The site not only features user-generated content and other online video programming, but also Sony Minisodes, five-minute clips of classic TV shows. MySpace set up deals with Reuters, the New York Times and National Geographic to bring quality content to MySpaceTV.com. Users can also create their own customized channel pages. These customizable channels will allow users to save videos, comments and playlists, and the channels can also be linked to a user's regular MySpace profile. MySpaceTV is available to nonmembers, but only registered MySpace users will be able to upload content. Other MySpaceTV features include:

News Corp., which owns MySpace, has joined NBC Universal to embark upon a venture that will help the two media companies air their TV shows and movies over the Internet in a legal and profitable manner. MySpaceTV is set to be one of the outlets for the partnership. This partnership should aid MySpace in its quest to surpass other major video sites like YouTube and Yahoo.

Many bloggers and online video connoisseurs believe that MySpaceTV copied YouTube's format too closely. Everything from MySpaceTV's page layout to its video organizational method is questionably similar to that of YouTube. Some people believe that MySpaceTV intentionally copied YouTube in order to achieve comparable success, but other people think that there really was no other way to construct the site. YouTube set up its site so perfectly that there was little to no room for improvement and no chance to succeed without following its example. Either way, both sites do function in similar ways. The deciding factor for many Web video fans will be whether they are already on MySpace.com when they decide to hunt for online videos.

On the next page, we'll learn about MySpace's expansion into movies, news and comedy.