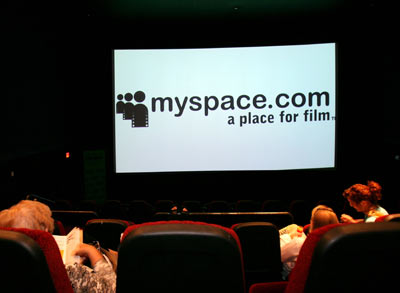 MySpace was one of the sponsors of the Cinevegas Film Festival in 2007.
Photo courtesy Getty Images

Movie fans from around the world use MySpace Movies to find information on new releases and films that are still in production. It's a special section of the site that provides users with access to video clips and summaries of movies that they want to see. MySpace Movies offers Hollywood news and a search field that lets users find show times and purchase tickets online. Other features of MySpace Movies include:

Even though MySpace Movies doesn't offer any services that are above and beyond those of ordinary movie Web sites, it gives users one less reason to exit MySpace's domain. Plus, avid movie fans enjoy adding movie profiles to their friends list.

MySpace NewsIn April 2007, MySpace launched MySpace News. MySpace News is a news aggregator that takes algorithms and user ratings into account. It draws news articles from reputable sources as well as from personal blogs, all in real time. MySpace users can submit Web sites to the aggregator database, and the stories are then rated by users on the site. In this way, Myspace positions itself between fully aggregated news sites like Google News and fully user-submitted news content like Digg.com. MySpace News engages its community by allowing users to rate and comment on the stories. Users can browse news items by common topics such as sports, politics and travel, and the results can be narrowed by location. Although it is far from being the site's most widely used section, MySpace News will undoubtedly grow in popularity, especially as longtime users mature into adulthood. The fact that MySpace has moved into more serious realms of media, like news and politics, is evidence of the site's desire to bring every aspect of the Web to one place.

Myspace FilmNovice and expert filmmakers alike use MySpace Film as an opportunity to promote, share and discuss their work in a social network setting. Like MySpace's other artistic channels, MySpace Film features rotating banners that spotlight user-generated content on its homepage. As you can imagine, films featured on MySpace Film's homepage can gain popularity throughout the world, which is more exposure than most amateur filmmakers ever dream of getting.

MySpace Film has a section called Festival Focus, which promotes independent film festivals and has links to festivals' MySpace pages. Some of the MySpace Film features include:

Every filmmaker on the site has a chance to win the User's Choice Award, which brings the winner fame and notoriety. Matt Riddlehoover won the User's Choice Award in June 2006 for his film "To a Tee." The exposure that Riddlehoover received from winning the MySpace award has brought him all sorts of media attention, including direct quotes in an article in Filmmaker magazine.

MySpace ComedyAmateur comedians and seasoned professionals alike use MySpace Comedy to advertise and promote themselves. Although frequenting open-mic nights is good practice, it is no longer the only way for an amateur comedian to gain recognition. In the summer of 2006, MySpace launched a new section called MySpace Comedy. Some of the section's features include:

Even though the MySpace Comedy channel focuses more on commercial rather than user-generated content, it still provides amateur comedians with great opportunities for networking. Dane Cook is a good example of the modern Internet comedian. Cook created a profile for himself in late 2003. Although MySpace Comedy wasn't yet up, Cook utilized the social-networking of MySpace to connect with his audience. He posted bits of comedy on his page every day and added links to his own site, DaneCook.com. Since Cook created his MySpace profile, more than 2 million people have added him as a "friend."

For more information on MySpace and related topics, check out the links below.