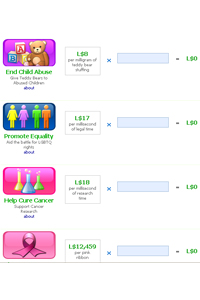 You can donate your Lunch Money to Causes like these.
Screenshot by HowStuffWorks.com

One of the popular applications on myYearbook is the Battles feature. Members can battle one another by uploading photos or videos of themselves and challenging other users. There are many different categories members can choose from to categorize their battles. They range from Best Pet to Biggest Dork to Who Would Win in a Fight?

Once a battle begins, other myYearbook members can vote on the person they think should win the contest. Normal votes cost nothing and are worth one point. But you can also choose to cast a supervote. Supervotes are worth either five or 10 votes and cost $500 or $1,000 in Lunch Money, respectively. Members can also choose to join a VIP club to receive access to larger supervoting privileges among other benefits.

Battles can turn into popularity contests. People who have a lot of friends may have an early advantage. The participant can ask his or her friends for support in the battle. But anyone can view battles even if they aren't friends with either of the participant so having a lot of friends doesn't guarantee a victory.

The site keeps a record of wins and losses for each member. You can view a member's battle history and see how he or she stacks up against other people in various categories. There's even an option to view the hall of fame and see the people who have won the most battles.

Of course, with any contest there will be people trying to game the system. On myYearbook, the most common tactic is to use the RTF tactic. RTF stands for "return the favor." Essentially, by voting for that person in a battle, you will have that person's support in a future battle of your own. If the person you support has a lot of friends, you may end up with hundreds of votes on your side. Of course, your opponent is likely trying to do the same thing.

You might wonder if the battles mean anything at all if, at the end of the day, it's just a measure of who has the most influence on myYearbook. Why would anyone start a battle in the first place? There are two main reasons: pride and Lunch Money. Establishing an impressive list of wins is a source of pride for many people. And winning a battle earns you a reward in the form of Lunch Money.

But what is Lunch Money and what can you do with it?