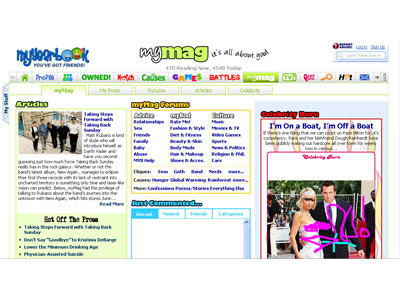 The MyMag section allows members to post articles for the rest of the community to read.
Screenshot by HowStuffWorks.com

For several years in the United States, MySpace was the king of social networking sites. But in recent years, MySpace's growth has slowed while two other sites, Facebook and myYearbook, have grown. Facebook has more than 200 million users and is the new head of the pack when it comes to online social networks in the United States. But myYearbook is steadily growing as well.

Both sites allow users to create free profiles, send messages to other members and link to media like music or videos on their profiles. Both sites act as platforms for games and blog posts. And both allow members to upload photos and customize their profiles in various ways.

In myYearbook's "Our Story" section, the founders describe MySpace as "creepy." Perhaps the founders were alluding to the fact that there are sites like MyDeathSpace that document sordid and tragic occurrences in the lives of MySpace members. Or maybe it's a reference to a story about MySpace removing more than 90,000 profiles belonging to registered sex offenders in the United States [source: The Sidney Morning Herald]. Whatever the motive, it's clear that the founders of myYearbook plan to pull no punches.

Anyone can create a myYearbook account. In other words, nothing is stopping the same "creepy" people from MySpace from joining myYearbook. It's possible the only reason MySpace has had to remove so many accounts is due to how many users it has overall. In fact, there's a major difference in scale. MySpace has over 124 million users to myYearbook's 11 million [source: The Guardian]. But MySpace has been shrinking while myYearbook is growing. It might take a while for myYearbook to gather more members than MySpace but if the trend continues it will happen.

Another difference is in the style of presentation. MySpace's layout uses tabs and pull-down menus in a simple blue and white scheme. The myYearbook style is much more colorful and playful. That might attract more young users but it could hurt myYearbook when it comes to retention. There's a danger that the user base will outgrow the frantic colors and graphics of myYearbook profiles.

Ultimately, myYearbook appeals to a younger crowd. Many of the games, quizzes and applications are focused on appearances and popularity of community members and that just might be the mix the site needs to contend with the larger social networking sites.