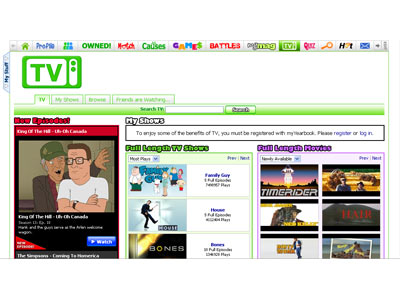 Hulu and myYearbook work together to provide myYearbook members access to full length movies and TV shows.
Screenshot by HowStuffWorks.com

Why join myYearbook? The first reason is that it allows users to keep up with old friends while making new ones. The various search functions make it simple to find other community members. If the people you're looking for aren't on the service, it's not hard to invite them to join. And remember, if someone accepts your invitation to join myYearbook, you'll be rewarded with bonus Lunch Money.

Another reason to join is to get more involved in charitable organizations. Donating your Lunch Money to a specific cause helps funnel actual money to that cause. And you'll have the opportunity to learn about several charitable organizations, what they do and how you might help. Donating Lunch Money is easy -- but it could also serve as the first step toward an ongoing relationship.

Speaking of relationships, you might even find true love on myYearbook. There's a match service that will randomly pull images of other myYearbook members and present them to you. You can choose to become a secret admirer or go straight to the user's profile and send a message to him or her.

You can also use myYearbook's forums to discuss current events and issues with other members. Topics range from heavy subjects like religion and politics to lighter fare like television programs or sports. The more active you are in the community, the more you'll get out of it.

If you have aspirations to become a journalist, you can write an article and submit it to the site. The myMag section contains articles written by other myYearbook members. It's easy to become an author -- all you have to do is submit your name, a short bio and an image. Once you've registered as an author, you can start writing and submitting articles for publication.

If you're a television fan, you can use myYearbook to watch episodes of several television shows. You can even subscribe to a TV show and have new episodes delivered to your profile page as soon as they become available. The site has a partnership with online video distributor Hulu.

As myYearbook continues to grow and evolve, the founders will likely add more features to the site. As it stands now, myYearbook is a robust community of young users who are growing up in an era of online social networking. It shouldn't come as a surprise that two teenagers were able to pin down what other people in their age group are looking for when it comes to a social network. It will be interesting to see where it goes from here.

To learn more about social networking sites like myYearbook and other related topics, look up the links below.