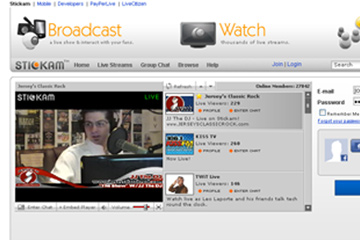 Thanks to the World Wide Web, the days of the phrase "look ma, I'm on TV" may be numbered. Not only has the Web created new ways for people to communicate and make new friends, but it also breaks down walls surrounding well-established industries like publishing and broadcasting. Before the Web, getting on camera usually required a lot of luck -- either the good or the bad variety. Today, anyone with a webcam and high-speed Internet access can create video content on the Web.

Sites like YouTube and Vimeo host pre-recorded video files. Users can shoot their footage, edit it, upload it and sit back as the world watches their work. While that was a huge leap forward, there was still one mountain to conquer: live streaming.

At first, streaming live video over the Web required extensive and expensive resources. But enterprising Internet business professionals saw the potential for a new service. Originally, the goal was to build a video Web conferencing system. But gradually, entrepreneurs saw the potential of building an online social network around the capability to stream live video.

Stickam.com is one of the sites that emerged from this concept -- other sites like blog.tv, Justin.tv and Ustream.tv offer similar services. All of these sites combine live video and social networking to some degree. All of them allow members to create programming and shows if they desire. Some people take this opportunity to extremes and broadcast nearly everything they do all day -- a practice known as lifestreaming.

But it's not just average people who use Stickam to connect with an audience. Schools and universities have used the service to broadcast press conferences to students. Bands like MxPx have performed concerts to audiences tuned in through Stickam. With Stickam, people, bands and organizations have the chance to reach a wide audience without breaking the bank.