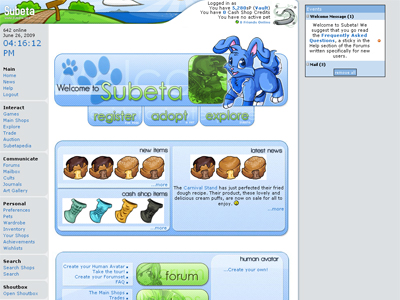 Subeta is a social networking site on which you can adopt virtual pets. See more pictures of popular web sites.
Screenshot by HowStuffWorks.com

The Internet has opened new ways to meet and get to know people like never before. Social networking Web sites are popping up to cater to all types of tastes and preferences. There are sites for dating such as eHarmony, sites for users with similar interests and hobbies such as CarDomain, and sites for, well, just plain-old social networking such as Facebook, MySpace and more recently Twitter. Video sites like YouTube have been a tremendous step toward self expression and a means for people to reach out to others interested in seeing what their imaginations can cook up.

One such site is Subeta, a social networking Web site on which users create human avatars that care for and interact with virtual pets. The site was created by Keith Kurson in 2006 and runs with the help of volunteers and a few paid staff members. Subeta is a virtual pet site with more than 150,000 registered users that gives members the ability to own and care for several pets while simulating the everyday rigors of keeping them healthy, feeding them and maintaining their health.

In this article, you'll find out about the features and resources found in Subeta, as well as some of the hurdles, including the infection that turned many users' avatars into zombies. Subeta is designed as a Web site for younger people to use to network with others from across the world. Subeta can teach some practical principles such as money management and marketing; however, it also has a darker side, which might give some users pause.

On the next page, we'll take a look at the basics of Subeta and learn how to get started. 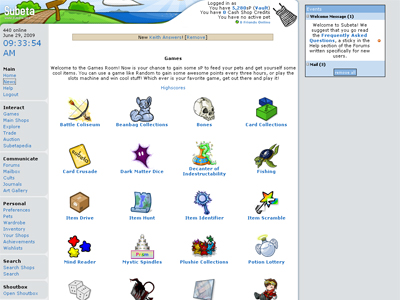 On Feb.14, 2009 -- Valentines Day -- an event referred to as the Love Epidemic spread throughout Subeta. Human avatars came down with one of four strains of an infection that went through eight stages and dramatically changed their appearances. Users caught either the Love Leopard where hearts spread across the body like the measles; a Love Bite, that would grow infected with time; the Foot Burn, a rash that originated at the feet before spreading over the entire body or Boob-itis, a condition where a small mark on the chest would grow into a gaping hole, exposing the heart and rib cage. Once the avatar reached stage seven or eight of the infection, they were considered zombies.

Three medications, all of which could be purchased within the game, were found to aid in recovery, but each had side affects and none were proven to cure the ailments. Lovitol made the faces red and swollen, hyperamory inducer turned the eyes red and resulted in a pink, gooey discharge and amoricide resulted in a purple cloud over the face.

The cure eventually came from a non-player character named Louis L'amour. Dubbed Lamouracillin, the antidote was available for the cost of 10 candy hearts. In order to obtain candy hearts, users had to complete several Valentine's quests, which took about one hour each. In an unexpected turn of events, the zombie avatars became wildly popular among users. In fact, many chose to allow their avatars to remain infected.

In line with the zombie theme, Subeta users can apply blood-red coloring to their pets to give them a gruesome appearance. In addition, users can choose to make their pets look like zombies if they choose. Many of the human avatars on Subeta message boards have gothic appearances suggesting that many of these users may be in tune with the "emo" subculture. It's not uncommon to run across suggestive sexual anime characters and artwork in some Subeta user profiles.

While the Love Epidemic left some users zombies, and there is a fair bit of gore in Subeta, that doesn't mean users aren't getting some benefit out of the social networking site. On the next page, we'll take a look at how teens may actually be preparing for life after high school using some of the things they learn in Subeta. 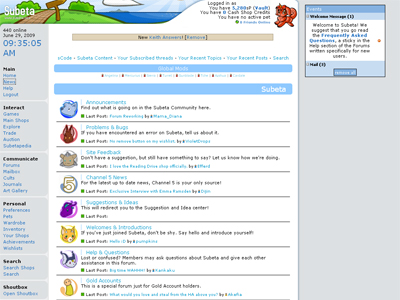 For more information on social networking sites and related topics, take a look at the links on the next page.