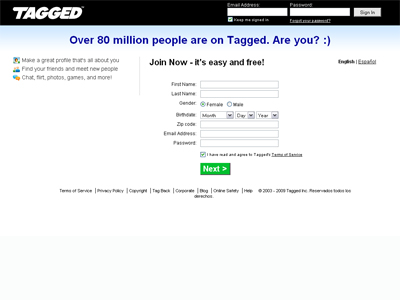 Like most other social networking sites, you can't begin exploring Tagged until you sign up for a free account. See more pictures of popular web sites.
Screenshot by Nathan Chandler

Social networking sites like MySpace and Facebook sometimes have the feel of a giant game of tag, where everyone reaches out and touches everyone they can connect with on the Internet. So perhaps it's no surprise that these days, one of the hottest online communities is called Tagged.com. Tagged is a blend of social networking features that MySpace and Facebook users will find very familiar.

Tagged launched in 2004 as a so-called "interactive social experience," the brainchild of Harvard graduates Johann Schleier-Smith and Greg Tseng. The two wanted to establish a commanding presence among users ages 13 to 19 by offering networking services slightly different than those found on other online community sites. Rather than simply help people reiterate their offline social groups, Tagged was designed to help users meet lots of new people with similar interests in a short amount of time.

And now it's not just teenagers who can make a lot of new online friends. In October 2006, Tagged opened its doors to all ages to increase its range of potential users. According to company statistics, 74 percent of users are over the age of 21, and the vast majority of users are evenly distributed between the ages of 18 to 44 [source: Tagged].

In addition to its millions of users, Tagged also attracts its share of unwanted attention. The site is a target for anti-spam crusaders and unfortunate e-mail users caught in Tagged's aggressive, if not unique, recruiting techniques. So before you rush to open an account, read on to see why Tagged is so popular and how you can best use its features to your advantage.