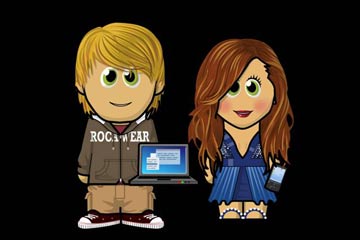 WeeWorld is a social networking service for teens that allows users to create their own cartoon avatars. See more pictures of popular web sites.
WeeWorld

In an economy that's down, what's a sure way to make money? Well, there are several recession-proof industries that tend to make it through tough times, like movies, weddings and even cosmetics, but one new type of service that we might add to the list is, oddly enough, social media. Web surfers seem to be flocking to Web sites for escape and entertainment in games and online socialization, especially ones that highlight fun and self-expression.

One Web site in particular, WeeWorld, has proven that teens, or at the very least the parents of teens, are willing to spend money on online goods. While other businesses have struggled during the recession, WeeWorld's numbers have soared [source: Virtual World News]. The site also claims to have more than 26 million unique visitors, a number that's continuing to grow.

So what is WeeWorld? WeeWorld is an online community that does several things at once. It's essentially a social networking avatar service, where users go to create digital versions of themselves, inhabit a virtual world, make friends and chat with friends new and old, "shop" for gifts and personal items for their avatar, play online video games and earn points. Members can also use their personal avatars across other Web sites that support WeeWorld; it can be something as simple as a e-mail signature, where the image of your avatar is added alongside your name, e-mail address and phone number or the service can post your avatar onto other social networking Web sites like MySpace and import information as you update your status.

Originally WeeWorld was meant simply as an avatar design service. Users would design cartoon characters called WeeMees, and the objective was to design a cartoon character of yourself (or of someone completely different, if you decided to take on a new personality). If you've ever used an application to create your own personal "Simpsons" character, that's a close approximation of the way WeeWorld began. Actually, many people claim the cartoon WeeMees bear a resemblance to the animated characters in the television program "South Park" from Comedy Central.

So how does WeeWorld work?