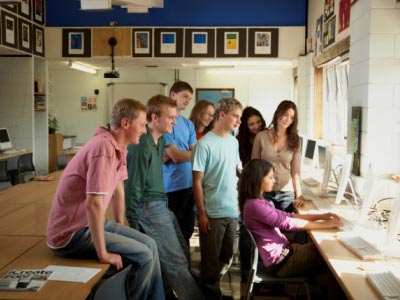 Zwinky aims to be more than just a place for members to talk.
Ableimages/Getty Images

Like most social networking Web sites, Zwinky allows its users to make friends, chat and socialize from their desktop or laptop computers. But it's a little bit more than a place to gather and talk. The portable aspect of Zwinktopia -- the option of importing Zwinky avatars onto other Web sites -- has made it both flexible and popular for users. The introduction of Zwinktopia has added a completely different virtual aspect to the service.

Speaking of Zwinktopia, Zwinky is similar in fashion to Club Penguin, the Disney-owned social networking world where users create and control their own penguin avatars. Club Penguin is aimed more at a younger demographic -- generally children between the ages of 6 and 12 -- while Zwinky's age group has to be older than 13 to join, but the features and objectives of both sites are nearly the same. Both sites require users to make their own personal avatars. Both services also exist in an imaginary virtual world in which users can move around: Club Penguin members roam around a chilly island, while Zwinky users move from place to place inside Zwinktopia. And on top of making friends and chatting, there's also a big focus on game playing. By playing these games, members of Club Penguin and Zwinky earn their own special kind of currency, which players can cash in for virtual goods.

In a press release, spokespeople for Zwinky pointed out the ability to create a new personality, try out new fashion trends or "make themselves hipper, trendier or more glamorous" as a positive aspect of the service. The release was also very straightforward about the fact that users could create Zwinkies that looked nothing like themselves in real life. Critics, on the other hand, point out that sites like Zwinky place too much emphasis on consumerism and attempt to suck users in instead of teaching them real world values. Regardless of that debate, Zwinky had 16 million unique members as of August 2008, and the service has added Zwinky Cuties, another virtual world marketed toward younger girls, to its roster.

For more information about social networking and other related topics, follow the links below.