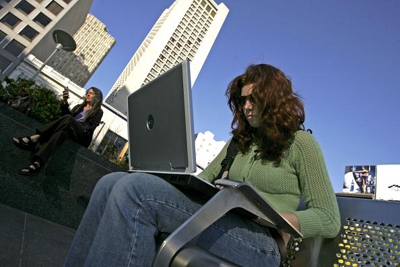 With mobile broadband, computer users can surf the Internet and check e-mail from any location, including outside.
© Justin Sullivan/Getty Images

There are two basic technologies used to operate cell-phone networks: Global System for Mobile Communications (GSM) and Code Division Multiple Access (CDMA). GSM is more popular in Europe and Asia and CDMA is more common in the United States. The major technical differences between the two systems have to do with the way each technology shares space on the radio spectrum. Without getting into the details, both GSM and CDMA use different algorithms that allow multiple cell phone users to share the same radio frequency without interfering with each other.

Mobile broadband is also known as 3G, or third-generation cell-phone technology. Both GSM and CDMA have developed their own 3G technology solutions for delivering high-speed Internet access to mobile devices.

The CDMA-based mobile broadband technology is called EV-DO (Evolution-Data Optimized or Evolution-Data Only). The trick behind EV-DO is that it runs over a part of the cellular network devoted entirely to data. Voice calls require a lot of bandwidth to maintain sound quality. By separating the data channel from the voice channel, the network can maximize data transfers and provide higher-speed access to e-mail, the Internet and multimedia. The downside is that you can't access the Internet and other data tools when talking on your cell phone. EV-DO advertises average speeds of 300-400 Kbps (kilobytes per second), the equivalent of DSL.

To use an EV-DO network, you need to either have a device that's already loaded with EV-DO hardware (like a BlackBerry or other smartphone) or a special network card that plugs into your laptop. These network cards connect via USB ports or other standard PC card slots and act as antennas for mobile broadband signals. For the fastest download and upload speeds, you need to be within range of the EV-DO cellular signal. Otherwise, you'll be bumped down to the 1xRTT (Radio Transfer Technology) standard, which broadcasts at speeds between 60 and 100Kbps.

GSM's answer to EV-DO is something called HSDPA (High-Speed Downlink Packet Access). Unlike EV-DO, an HSDPA network can handle both voice and data transfers, so you can talk to mom and surf the Web at the same time. It maximizes data transfer speeds by focusing on downloading information, not uploading. HSDPA advertises average download speeds between 400 to 700 Kbps.

Like EV-DO, you'll need special network hardware to access HSDPA mobile broadband. You either need a device with a built-in HSDPA card or a special PC card that plugs into a laptop computer. You'll also need to be within range of an HSDPA signal, which is concentrated in metropolitan city centers and along major highways.

Now let's look at some of the features of mobile broadband service as offered by the large cell-phone providers in the United States.