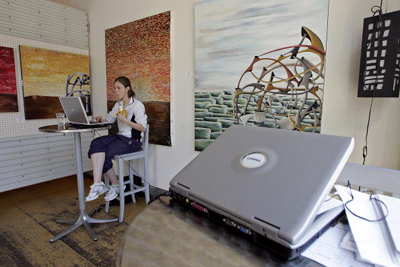 All three of these companies have built nationwide cellular networks. But not every part of the network is created equal. If you're in a major metropolitan area, then you'll have the most data services available to you. But if you're out in a rural area, you may be limited to simply making phone calls or browsing the Web at dial-up speeds.

For example, AT&T's mobile broadband service is called BroadbandConnect. With BroadbandConnect, you can send e-mails, instant messages, browse the Web at speeds between 400 and 700Kbps, watch TV shows, and even record and share live video during a phone call.

But to access all of these BroadbandConnect services, you need to be within coverage range of AT&T's 3G network. Right now, that's confined to the nation's largest cities. If you're outside of that coverage area, you can still access some data services like e-mail, text messaging and Web browsing, but at speeds between 75 and 135Kbps.

Sprint and Verizon's services are the same. With Sprint's mobile broadband service, you can use your cell phone to send e-mails, listen to streaming radio stations, download songs and music videos, watch live TV, share photos, play games and browse the Web at speeds between 600Kbps and 1.4Mbps (megabytes per second).

But like AT&T, the most data services and the best connection speeds are only available in 3G coverage areas, which are usually found in the nation's biggest cities. On the fringes of these coverage areas are mobile broadband roaming areas, which offer limited multimedia and data services. Even further outside major cities is the regular Sprint nationwide cellular network, with basic data services and connection speeds between 50 and 70Kbps, similar to dial-up.

What you pay to access these mobile broadband networks depends on what device you're going to use. There are four basic options for connecting to a 3G network:

For each of these options, the cellular providers offer several different mobile broadband payment plans. There's usually an option for unlimited monthly access, which is the most expensive plan. Another option is to pick a plan that allows for a maximum amount of data transfer a month. Sprint, for example, has an option for laptop users to pay $39.99 a month for 40MB (megtabytes) of data transfer over the network. Verizon has a 5GB (gigabyte) plan for $59.99 a month. To give you an idea of what that means, Verizon says you could send 1,747,627 e-mails a month before reaching 5GB, or look up nearly 35,000 Web pages [source: Verizon].

Cellular providers generally package their mobile broadband services for cell phone users. Sprint's package is called Power Vision and AT&T's is called MEdia Net. You pay extra for these packages on top of your regular calling plan. Or you can sign up for an all-inclusive plan that gives you a certain amount of anytime minutes per month, plus unlimited mobile broadband usage. With a PDA or smartphone, you can choose from unlimited or maximum data usage plus a voice-calling plan.

If you don't want to sign up for a monthly plan, you can actually pay by the kilobyte of data transfer. Sprint, for example, charges three cents a kilobyte for mobile broadband access without a monthly plan.

Now let's break down the terms and fees of a mobile broadband plan.