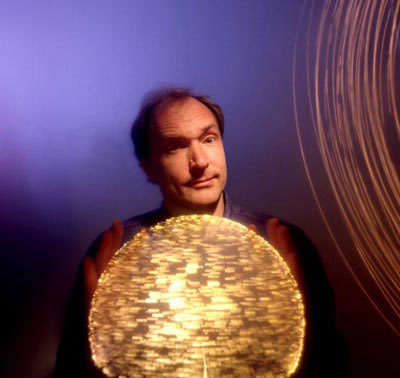 Berners-Lee's vision of the future Web is similar to the concept of Web 3.0. It's called the Semantic Web. Right now, the Web's structure is geared for humans. It's easy for us to visit a Web page and understand what it's all about. Computers can't do that. A search engine might be able to scan for keywords, but it can't understand how those keywords are used in the context of the page.

With the Semantic Web, computers will scan and interpret information on Web pages using software agents. These software agents will be programs that crawl through the Web, searching for relevant information. They'll be able to do that because the Semantic Web will have collections of information called ontologies. In terms of the Internet, an ontology is a file that defines the relationships among a group of terms. For example, the term "cousin" refers to the familial relationship between two people who share one set of grandparents. A Semantic Web ontology might define each familial role like this:

For the Semantic Web to be effective, ontologies have to be detailed and comprehensive. In Berners-Lee's concept, they would exist in the form of metadata. Metadata is information included in the code for Web pages that is invisible to humans, but readable by computers.

Constructing ontologies takes a lot of work. In fact, that's one of the big obstacles the Semantic Web faces. Will people be willing to put in the effort required to make comprehensive ontologies for their Web sites? Will they maintain them as the Web sites change? Critics suggest that the task of creating and maintaining such complex files is too much work for most people.

On the other hand, some people really enjoy labeling or tagging Web objects and information. Web tags categorize the tagged object or information. Several blogs include a tag option, making it easy to classify journal entries under specific topics. Photo sharing sites like Flickr allow users to tag pictures. Google even has turned it into a game: Google Image Labeler pits two people against each other in a labeling contest. Each player tries to create the largest number of relevant tags for a series of images. According to some experts, Web 3.0 will be able to search tags and labels and return the most relevant results back to the user. Perhaps Web 3.0 will combine Berners-Lee's concept of the Semantic Web with Web 2.0's tagging culture.

Even though Web 3.0 is more theory than reality, that hasn't stopped people from guessing what will come next. Keep reading to learn about the far-flung future of the Web.