Browse the article How Encryption Works 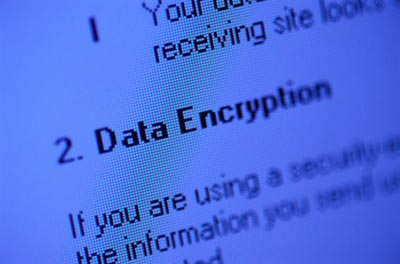 When we use the Internet, we're not always just clicking around and passively taking in information, such as reading news articles or blog posts -- a great deal of our time online involves sending others our own information. Ordering something over the Internet, whether it's a book, a CD or anything else from an online vendor, or signing up for an online account, requires entering in a good deal of sensitive personal information. A typical transaction might include not only our names, e-mail addresses and physical address and phone number, but also passwords and personal identification numbers (PINs).

The incredible growth of the Internet has excited businesses and consumers alike with its promise of changing the way we live and work. It's extremely easy to buy and sell goods all over the world while sitting in front of a laptop. But security is a major concern on the Internet, especially when you're using it to send sensitive information between parties.

Let's face it, there's a whole lot of information that we don't want other people to see, such as:

­Information security is provided on computers and over the Internet by a variety of methods. A simple but straightforward security method is to only keep sensitive information on removable storage media like portable flash memory drives or external hard drives. But the most popular forms of security all rely on encryption, the process of encoding information in such a way that only the person (or computer) with the key can decode it.

In this article, you will learn about encryption and authentication. You will also learn about public-key and symmetric-key systems, as well as hash algorithms.­ 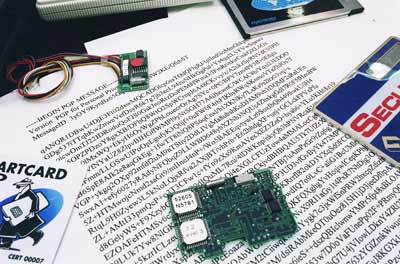 An encrypted document is surrounded by an array of commercially available encryption products at the FBI office in Washington, D.C.
Scott J. Ferrell/Congressional Quarterly/Getty Images

Computer encryption is based on the science of cryptography, which has been used as long as humans have wanted to keep information secret. Before the digital age, the biggest users of cryptography were governments, particularly for military purposes.

The Greek historian Plutarch wrote, for example, about Spartan generals who sent and received sensitive messages using a scytale, a thin cylinder made out of wood. The general would wrap a piece of parchment around the scytale and write his message along its length. When someone removed the paper from the cylinder, the writing appeared to be a jumble of nonsense. But if the other general receiving the parchment had a scytale of similar size, he could wrap the paper around it and easily read the intended message.

The Greeks were also the first to use ciphers, specific codes that involve substitutions or transpositions of letters and numbers.

As long as both generals had the correct cipher, they could decode any message the other sent. To make the message more difficult to decipher, they could arrange the letters inside the grid in any combination.

Most forms of cryptography in use these days rely on computers, simply because a human-based code is too easy for a computer to crack. Ciphers are also better known today as algorithms, which are the guides for encryption -- they provide a way in which to craft a message and give a certain range of possible combinations. A key, on the other hand, helps a person or computer figure out the one possibility on a given occasion.

Computer encryption systems generally belong in one of two categories:

In the following sections, you'll learn about each of these systems.

Just like two Spartan generals sending messages to each other, computers using symmetric-key encryption to send information between each other must have the same key.

In symmetric-key encryption, each computer has a secret key (code) that it can use to encrypt a packet of information before it is sent over the network to another computer. Symmetric-key requires that you know which computers will be talking to each other so you can install the key on each one. Symmetric-key encryption is essentially the same as a secret code that each of the two computers must know in order to decode the information. The code provides the key to decoding the message.

Think of it like this: You create a coded message to send to a friend in which each letter is substituted with the letter that is two down from it in the alphabet. So "A" becomes "C," and "B" becomes "D". You have already told a trusted friend that the code is "Shift by 2". Your friend gets the message and decodes it. Anyone else who sees the message will see only nonsense.

The same goes for computers, but, of course, the keys are usually much longer. The first major symmetric algorithm developed for computers in the United States was the Data Encryption Standard (DES), approved for use in the 1970s. The DES uses a 56-bit key.

Julius Caesar also used a similar substitution technique, shifting three letters up. If he wanted to say "CROSSING THE RUBICON," for instance, he'd write down "FURVV LQJWK HUXEL FRQ" instead. As you can see, the text is also broken up into even groups in order to make the size of each word less obvious.

One of the weaknesses some point out about symmetric key encryption is that two users attempting to communicate with each other need a secure way to do so; otherwise, an attacker can easily pluck the necessary data from the stream. In November 1976, a paper published in the journal IEEE Transactions on Information Theory, titled "New Directions in Cryptography," addressed this problem and offered up a solution: public-key encryption.

Also known as asymmetric-key encryption, public-key encryption uses two different keys at once -- a combination of a private key and a public key. The private key is known only to your computer, while the public key is given by your computer to any computer that wants to communicate securely with it. To decode an encrypted message, a computer must use the public key, provided by the originating computer, and its own private key. Although a message sent from one computer to another won't be secure since the public key used for encryption is published and available to anyone, anyone who picks it up can't read it without the private key. The key pair is based on prime numbers (numbers that only have divisors of itself and one, such as 2, 3, 5, 7, 11 and so on) of long length. This makes the system extremely secure, because there is essentially an infinite number of prime numbers available, meaning there are nearly infinite possibilities for keys. One very popular public-key encryption program is Pretty Good Privacy (PGP), which allows you to encrypt almost anything.

To implement public-key encryption on a large scale, such as a secure Web server might need, requires a different approach. This is where digital certificates come in. A digital certificate is basically a unique piece of code or a large number that says that the Web server is trusted by an independent source known as a certificate authority. The certificate authority acts as a middleman that both computers trust. It confirms that each computer is in fact who it says it is, and then provides the public keys of each computer to the other.

Look for the "s" after "http" in the address whenever you are about to enter sensitive information, such as a credit-card number, into a form on a Web site.

In your browser, you can tell when you are using a secure protocol, such as TLS, in a couple of different ways. You will notice that the "http" in the address line is replaced with "https," and you should see a small padlock in the status bar at the bottom of the browser window. When you're accessing sensitive information, such as an online bank account or a payment transfer service like PayPal or Google Checkout, chances are you'll see this type of format change and know your information will most likely pass along securely.

The padlock symbol lets you know that you are using encryption.

You can see how hard it would be to determine that the value 1,525,381 came from the multiplication of 10,667 and 143. But if you knew that the multiplier was 143, then it would be very easy to calculate the value 10,667. Public-key encryption is actually much more complex than this example, but that's the basic idea.

As stated earlier, encryption is the process of taking all of the data that one computer is sending to another and encoding it into a form that only the other computer will be able to decode. Another process, authentication, is used to verify that the information comes from a trusted source. Basically, if information is "authentic," you know who created it and you know that it has not been altered in any way since that person created it. These two processes, encryption and authentication, work hand-in-hand to create a secure environment.

There are several ways to authenticate a person or information on a computer:

Recently, more sophisticated forms of authentication have begun to show up on home and office computer systems. Most of these new systems use some form of biometrics for authentication. Biometrics uses biological information to verify identity. Biometric authentication methods include:

Another secure-computing need is to ensure that the data has not been corrupted during transmission or encryption. There are a couple of popular ways to do this:

Checksum - Probably one of the oldest methods of ensuring that data is correct, checksums also provide a form of authentication because an invalid checksum suggests that the data has been compromised in some fashion. A checksum is determined in one of two ways. Let's say the checksum of a packet is 1 byte long. A byte is made up of 8 bits, and each bit can be in one of two states, leading to a total of 256 (28 ) possible combinations. Since the first combination equals zero, a byte can have a maximum value of 255.

Let's look at a checksum example:

Cyclic Redundancy Check (CRC) - CRCs are similar in concept to checksums, but they use polynomial division to determine the value of the CRC, which is usually 16 or 32 bits in length. The good thing about CRC is that it is very accurate. If a single bit is incorrect, the CRC value will not match up. Both checksum and CRC are good for preventing random errors in transmission but provide little protection from an intentional attack on your data. Symmetric- and public-key encryption techniques are much more secure.

All of these various processes combine to provide you with the tools you need to ensure that the information you send or receive over the Internet is secure. In fact, sending information over a computer network is often much more secure than sending it any other way. Phones, especially cordless phones, are susceptible to eavesdropping, particularly by unscrupulous people with radio scanners. Traditional mail and other physical mediums often pass through numerous hands on the way to their destination, increasing the possibility of corruption. Understanding encryption, and simply making sure that any sensitive information you send over the Internet is secure (remember the "https" and padlock symbol), can provide you with greater peace of mind.

For more information on encryption and related topics, check out the links on the next page.