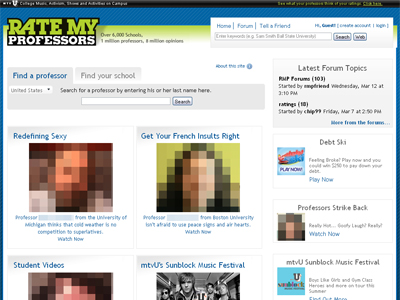 Whether you're about to start a class, or just looking ahead to registration for next semester, knowing what to expect from the professor can help relieve your first-day anxiety and provide insight on how to approach the class. The social networking Web site RateMyProfessors.com gives you access to more than 6.8 million student-generated professor ratings on more than one million professors from colleges across the United States, Canada and the United Kingdom. Like many social networking Web sites, you can access RateMyProfessors from your Web browser and use its services free of charge. This includes reading any of the professor ratings posted, even if you don't register for an account.

RateMyProfessors has enjoyed continued growth in popularity since John Swapceinski founded it in 1999. Swapenceinski, a software engineer from Menlo Park, Calif., sold the site to Baltimore Solutions, Inc., in late 2005. New owners Patrick Nagle and Will DeSantis weren't new to managing social networking sites, having created an online textbook trading site when they were in college. When Nagle and DeSantis moved to Viacom MTV Networks in early 2007, they took RateMyProfessors with them, relocating its headquarters to New York. Now, RateMyProfessors is part of mtvU, a collection of social networks, entertainment news, contests and articles targeted toward college students.

In this article, we'll look at the rating system at RateMyProfessors and see how it compares to professor feedback on other social network Web sites and online communities.

Scroll past the scorecard totals to view all submitted ratings for that professor. This list includes the date of the rating, the class that the student was taking and the rater's interest in the professor prior to taking the class. The comments sometimes include helpful tips for success in that course with that particular professor. Like other online communities, RateMyProfessors lets you flag any information that is erroneous, slanderous or otherwise doesn't seem to fit its posting guidelines.

RateMyProfessors follows the model of other social networks by requiring you to create an account and log in before contributing ratings or submitting professor feedback. Besides creating a username, password and other typical social networking profile information, RateMyProfessors requires you to enter your school, major and at least one current professor. From there, you can select up to six current professors for your profile, and you can select whether you'd like updates on music, contests and even casting calls from mtvU.

While you're logged in to RateMyProfessors, you can search for any professor in the system and submit a rating. If you cannot find the professor in search results, scroll to the end of the results and click the link to add a teacher. No verification process is required when entering the professor's information. As a result, RateMyProfessors has some fictional professors with amusing fictional ratings, often inspired from television or movies.

When you complete your rating, RateMyProfessors requires you to enter more information other than that shown on the professor's rating page. Besides the professor's scorecard, the rating form asks for textbook feedback, your grade (including "Rather Not Say") and whether the professor is still teaching. Comments are limited to 350 characters, and the form provides a link to the posting guidelines -- a standard feature for text submission on social networking sites.

If you're a professor, you also have recourse at RateMyProfessors. Each professor's page includes a link that reads "Professors add your rebuttal here." The link pops up a message explaining how professors can write rebuttal comments linked from student-provided ratings. As a professor, you must click a separate registration to become a "certified professor." This registration process is more extensive, and the site indicates that each registration is "analyzed and verified before access is granted."

In the next section we'll look at the benefits of using RateMyProfessors and how it compares to its competitors. 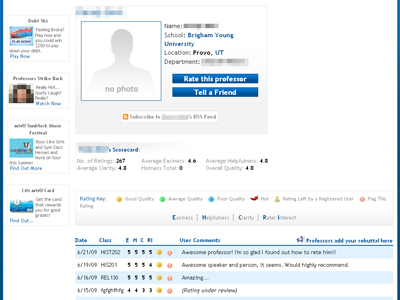 How Do You Get Rid of Ads on Facebook?
Can the President Legally Delete a Tweet?
Are social networks good for job productivity?