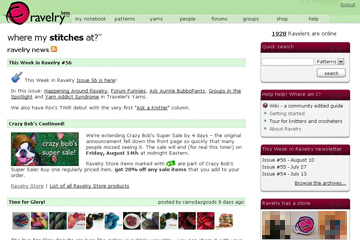 Some may say that they believe the yarn arts, like knitting and crochet, are only for grandmothers. However, the Internet is helping to debunk this stereotype. Knit and crochet enthusiasts around the world can use the Internet to search for patterns, share ideas, exchange tips and show off their projects. These yarn artists come together online at social networks like Ravelry.com where they can find patterns, yarns and even new friends.

Ravelry is a free social networking Web site for those who knit, crochet and spin yarn. Ravelry includes tools to help you plan and track your projects, and to organize your yarn and tools. For interaction with other members, the site includes forums, groups, pattern sharing and yarn contributions. With more than 400,000 registered users, Ravelry also lets you create an advertiser account and purchase ad space to help promote your own business targeted to yarn artists.

Ravelry was created by husband-and-wife team Casey and Jessica Forbes in April 2007. Jessica, who had been blogging (and kitting) for years, stated that she was frustrated searching the Internet for just the right patterns and yarns. Casey, a computer programmer, joined Jessica in planning and creating their own Web site to bring together yarn artists and their resources. As Ravelry grew in its first two years, the Forbeses recruited employees from among its membership to handle responsibilities at the site. As of May 2009, the staff of four included Jessica, Casey, Mary-Heather and Sarah [source: Unraveled].

Since Ravelry launched, Casey and Jessica have featured their dog Bob as the site mascot. Bob is featured in ads and whimsical graphics throughout the site, and in some promotional goodies. Ravelry members recognize April 11 as "Bobmas," celebrating each anniversary of the Ravelry Web site [source: Unraveled].