Browse the article How Laptops Work 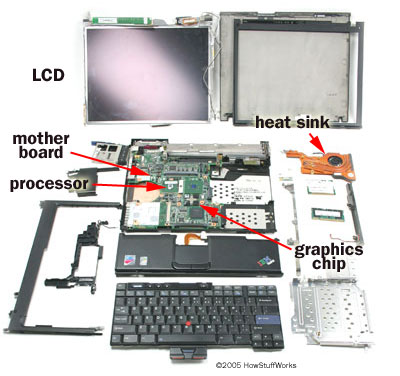 The i­nside of an IBM ThinkPad See more pictures of laptops.

In a way, the skyrocketing popularity of laptop computers is ironic. They're completely portable, and they use less power and make less noise than desktop models. But, they're often a little slower and have less graphics and sound processing power, although these differences can be too small for most users to notice.

Laptops are also more expensive than desktops. The price gap is closing, though -- laptop prices are falling faster than desktop prices, and laptop PCs actually outsold desktop models for the first time in May of 2005 [Source: Windows IT Pro].

How can all the equipment found in a desktop tower fit into such a small package? And how can laptops be efficient enough to run on battery power alone? In this article, you'll discover the answers to these and other questions about laptops.

Overall, lap­top and desktop computers are very similar. They have the same basic hardware, software and operating systems. The primary difference is how their components fit together.­

A desktop computer includes a motherboard, video card, hard drive and other components in a large case. The monitor, keyboard, and other peripherals connect wirelessly or with cables. Whether the case sits vertically or horizontally, it has lots of space for add-in cards, cables and air circulation.

A laptop, however, is much smaller and lighter than even the most compact PC tower. Its screen is an integrated part of the unit, as is its keyboard. Instead of a spacious case with lots of room for air circulation, a laptop uses a small, flat design in which all the pieces fit together snugly.

­Because of this fundamental design difference and because of a laptop's inherent portability, components have to: 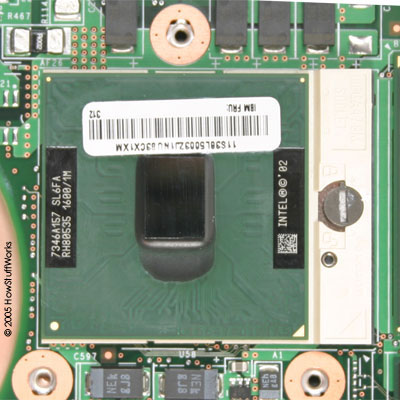 ­The microprocessor, or CPU, works with the operating system to control the computer. It essentially acts as the computer's brain. The CPU produces a lot of heat, so a desktop computer uses circulating air, a fan and a heat sink -- a system of plates, channels and radiator fins used to draw heat off of the processor -- to cool off. Since a laptop has far less room for each of these cooling methods, its CPU usually:

Some laptops use desktop CPUs that are set to run at lower clock speeds. Although this can improve performance, these laptops typically run much hotter and have a significantly reduced battery life.

A laptop heat sink and fan

Laptops usually have small fans, heat sinks, heat spreaders or heat pipes to help dissipate the heat from the CPU. Some higher end laptop models reduce heat even further with liquid coolant kept in channels alongside the heat pipe. Also, most laptop CPUs are near the edge of the unit. This allows the fan to move the heat directly to the outside instead of across other components. 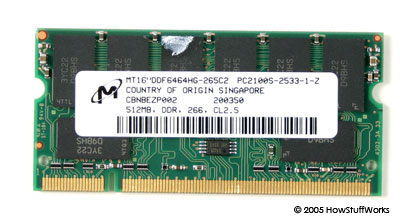 A laptop's memory can make up for some of the reduced performance that comes from a slower processor. Some laptops have cache memory on or very near the CPU, allowing it to access data more quickly. Some also have larger busses, allowing data to move between the processor, motherboard and memory more quickly.

Lapto­ps often use smaller memory modules to save space. Memory types used in laptops include:

Some laptops have upgradeable memory and feature removable panels for easy access to the memory modules.

­ Like a desktop, a laptop has an internal hard disk drive, which stores the operating system, applications and data files. However, laptops generally have less disk space than desktops. A laptop hard drive is also physically smaller than that of a desktop. In addition, most laptop hard drives spin more slowly than desktop hard drives, reducing both heat and power consumption.

Desktop computers have multiple bays for installing additional drives, such as CD and DVD ROM drives. However, space in a laptop is in much shorter supply. Many laptops use a modular design, allowing a variety of drives to fit in the same bay. These drives come in three different designations:

In some cases, these drive bays are not just limited to drives but will also accept extra batteries.

Next, we'll look at the video processing and display capabilities of a laptop. 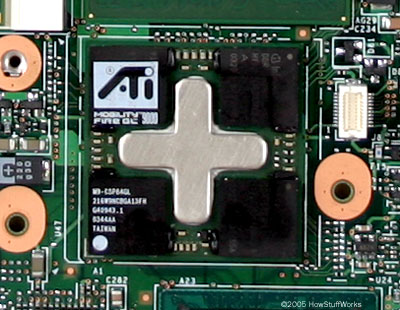 A graphics processing unit (GPU) is a microprocessor that handles the calculations necessary for 3-D graphics rendering. Like a CPU, a GPU produces a lot of heat. Most laptops have graphics capability built into the motherboard or have smaller graphics cards with a GPU designed specifically for laptop use. GPU manufacturers ATI and nVidia both make GPUs specifically for laptops. Laptops frequently share memory between the CPU and the GPU, saving space and reducing power consumption.

Many people don't notice a laptop's reduced graphics performance. Laptops have plenty of processing power for Web surfing and productivity applications. However, they may struggle with the latest 3-D games. A few specialty laptops, designed for gaming enthusiasts, include more powerful GPUs and additional video memory.

A laptop displays its graphics on a liquid crystal display (LCD) screen. Most screens measure between 12 and 17 inches, and the size of the screen affects the overall size of the laptop. In addition, laptop screens can be:

­ Active matrix displays have sharper images and are easier to read, and backlit screens are better for low-level lighting conditions.

This back view of the Toshiba's LCD panel is showing the fluorescent tube that provides the light and the screen that diffuses the light evenly over the surface.

Most laptops also have sound cards or integrated sound processing on the motherboard as well as small, built-in speakers. However, there is generally not enough space inside a laptop for a top-of-the-line sound card or a high-quality speaker. Gaming enthusiasts and audiophiles can supplement their laptops' sound capabilities with external sound controllers, which use USB or FireWire ports to connect to the laptop.

Laptops ­and desktops both run on electricity. Both have small batteries to maintain the real-time clock and, in some cases, CMOS RAM. However, unlike a desktop computer, a laptop is portable and can run on batteries alone.

­Nickel-Cadmium (NiCad) batteries were the first type of battery commonly used in laptop computers, and older laptops sometimes still use them. They have a life of roughly two hours between charges, but this life decreases with each charge based on the memory effect. Gas bubbles form in the cell plates, reducing the total amount of available cell space for recharge. The only way around this is to discharge the battery completely before recharging it. The other drawback of NiCad is that if the battery charges too long, it can explode.

Nickel-Metal Hydride (NiMH) batteries are the bridge between NiCad and the newer Lithium-Ion (LiIon) batteries. They last longer between charges than NiCad but overall have a shorter total lifespan. They suffer from the memory effect, but to a lesser extent than NiCad batteries.

LiIon batteries are the current standard for laptop computers. They are light and have long life spans. They do not suffer from the memory effect, can be charged randomly, and won't overheat if overcharged. They are also thinner than any other battery available for laptops, making them ideal for the new ultra-thin notebooks. LiIon batteries can last for anything from about 950 up to 1200 charges.

Many laptops with LiIon batteries claim to have a 5-hour battery life, but this measurement can vary greatly depending on how the computer is used. The hard drive, other disk drives and LCD display all use substantial battery power. Even maintaining wireless Internet connectivity requires some battery power. Many laptop computer models have power management software to extend the battery life or conserve battery power when the battery is low.

Laptops are available in a huge variety of configurations, with a wide range of options and capabilities. Here are a few things to keep in mind when you shop for a laptop:

Many people build custom PCs for themselves or customers. These home-made computers, called whiteboxes, represent a significant portion of the computer market. Some people also modify their computers for cosmetics or performance. This is called modding. But what about building or modding a laptop?­

A­ modded or homemade laptop is called a whitebook. Whitebooks represent about 5 percent of the notebook market right now, and this number is slowly rising. The industry has done a pretty good job of keeping end users out of laptops. They've made it difficult to open, modify and get parts for a laptop. In addition, opening the laptop chassis voids the manufacturer's warranty in most cases.

It is still difficult to find parts to build a laptop from the ground up, but vendors like ASUS and ECS allow some customers to order blank laptop shells. They are especially open to resellers who build whitebooks and sell them to customers. In addition, people can mod or upgrade what came with the shell. Companies like TechStyle have made a business of it.

A laptop shell consists of:

This means that anyone wanting to build a whitebook must find:

At this point, there are no real standards for the form factor (shape and design) of laptop parts. Processors designed for laptops are available for sale, but finding a motherboard for those chips is a different story. Hard drives are pretty standard, and SODIMM system memory is easy to come by, but other parts may take some digging.

Next, we'll look at the history of laptop computers. 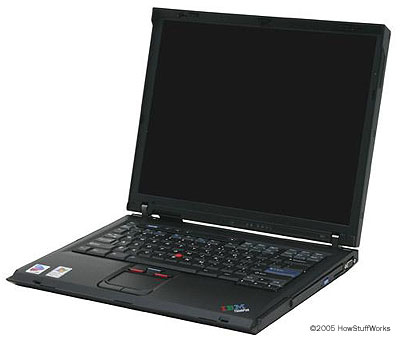 In the 1970s, Alan Kay of the Xerox Palo Alto Research Center had a vision for a wireless portable computer roughly the size of a notebook. He called it the Dynabook. Kay's Dynabook never got past sketches and a cardboard model, but it set the wheels in motion for the development of a truly portable computer.

I­n 1979, William Moggridge of Grid Systems Corporation created the first functioning portable computer: The Grid Compass Computer 1109. It had 340 kilobytes of bubble memory, a die-cast magnesium case and a folding electroluminescent graphics display screen. NASA bought a handful of them at $800 apiece for use in the space program.

Weighing in at a hefty 12 lbs (5.4 kg), the PC Convertible sold for $3,500. It was the first portable computer with the clamshell design used in today's laptops. The success of the PC Convertible was the catalyst for competitors like Compaq and Toshiba to switch to the clamshell design in their portable computers. And so began the era of the laptop computer.

For more information about laptops and related topics, check out the links on the following page.