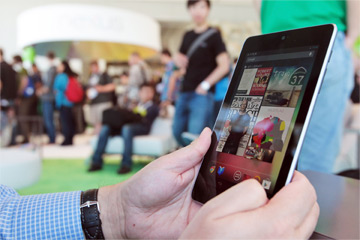 Cupcake, Donut, Éclair, Froyo, Gingerbread, Honeycomb, Ice Cream Sandwich and Jelly Bean. Either we're talking about a stash of confiscated food items from a Weight Watchers group picnic, or we're about to spend some time discussing Android operating system (OS) upgrades. Thank goodness it's the latter of the two.

Whereas Apple computer OSes get named for man-eating felines (Mountain Lion, Snow Leopard) and Microsoft chooses a seemingly incoherent assortment of letters, numbers and words (XP, 7, Vista), Google's Android line goes for a subtler, tastier approach. But don't let the friendly naming distract you; the company's schedule of releases is as aggressive as it gets. Those eight versions were released between 2009 and 2012.

That speed causes a common problem for tablet users who are prone to comments like this: "My hardware is running on Honeycomb (version 3.0). Can I upgrade to Ice Cream Sandwich (version 4.0), or can I leapfrog right to Jelly Bean (version 4.1)? Can my tablet even handle it?"

Those are all great, common questions. But before we even talk about upgrading anything, take a few minutes to back up your entire tablet using Android's built-in tools. It's easy enough. Just go to Settings, then Privacy and check the boxes for "Back Up My Data" and "Automatic Restore." This way, if the upgrade goes badly and you have to reset your OS, at least everything from photos to apps and settings will be saved off your tablet.

Now that we have that formality out of the way, we're ready to talk about upgrading your Android software.

Upgrading Your Android OS by the Book

Before we get into upgrades, it's important to know that some manufacturers are in the habit of adding different "skins," or user interfaces, to whichever stock version of Android they've selected for a device. As a result, Ice Cream Sandwich, say, isn't going to look or act the same across the assorted technologies you and your friends are packing. A manufacturer may tweak the operating system to work with a tablet's cameras or interface with a cellular digital service. That's what you get with an open source system. (But let it be said that there's spirited debate among the Android community about whether all this customization is necessary or just plain ridiculous.)

In short, when Google releases a new version of Android, it's a very basic platform. By the time it gets installed on your new tablet, it becomes an extremely proprietary operating system.

If you want to see which operating system you're running, go to the settings menu and tap on "About Tablet." It should display the current version of Android on your tablet.

Using manufacturer-approved OS upgrades will also help you keep your warranty intact. This is the smart, safe way to go. Now, let's look at some of the other options for upgrading your tablet.

The Root of the Android Matter

The downside to manufacturer-approved OS updates is that they're often more conservative than some advanced users would prefer. The manufacturer will not release a new version until it has been thoroughly tested and approved. And sometimes they won't advance to a newer version (like going from Ice Cream Sandwich to Jelly Bean) if the tablet's hardware isn't up to the task. That's when many users start to take matters into their own hands.

You may have heard of "jailbreaking" for iPhones and iPads. The same thing is called "rooting" by the Android crowd. This is where users unlock the manufacturer-supplied firmware to install their own updates, customized OSes and apps that factory-supplied operating systems won't accept. There are plenty of tutorials online to walk users through this process.

Before rooting, do some homework to make sure that the tablet and the intended version of Android will play nicely. Processing power and available memory are important issues here. Google provides the minimum requirements for each release, and hopefully so will any modified version of Android. Also, ask around the user forums to see if anyone has already successfully attempted a similar installation with the same type of tablet.

Of course, the downside to rooting is the inherent risk. If done improperly, a tablet can be rendered inoperable, the warranty can voided and the machine can develop security weaknesses [source: TechAdvisory]. And again, before installing a new OS, make sure that your tablet's technical specs are up to par for the new Android platform; having a deficient tablet trying to run a pumped-up operating system could leave the computer running worse than it did before. "Running worse" can range anywhere from excruciatingly slow performance to getting "bricked."

In short, rooting should be left up to advanced users, and even that's no guarantee that everything will go smoothly.

Put Your Root Down?

Are you thinking about rooting your device? The folks behind Android Central keep a running list of all the directions for rooting different tablets and smartphones. You can find it here: http://www.androidcentral.com/root.

As a regular user of Mac products, working on this piece got me very interested in the Android operating system. Sure, the iPad's strength lies in its uniformity, but there's something to be said for Android, the chameleon of OSes. Or perhaps "sherbet swirl" is a better description in keeping with their naming conventions.

How does HIPAA compliance affect data sharing?
How to Use Windows Device Manager
How Content-recognition Software Works