What is computer hardware? 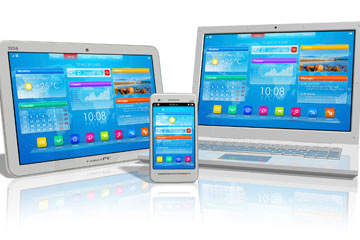 While laptops, tablets and smartphones all have different form factors, their internal components are quite similar.
©iStockphoto/Thinkstock

Laptops, desktops, smartphones, tablets: Their use cases couldn't be much different, could they? We use computers in more places and ways than ever before. But the internal components that make that possible are very similar. In most cases, they're just smaller.

Intel manufactures ULV, or ultra low voltage, processors for thin-and-light notebooks which run on less wattage than its regular laptop chips. Laptops also use smaller RAM and hard drives than desktops. Some laptop makers, like Apple, even solder solid state memory right onto the motherboard instead of including a hard drive, which saves even more space.

Phones and tablets have to be incredibly compact. Instead of a motherboard, the heart of a mobile device is a system-on-a-chip, or SoC. The SoC integrates everything -- processor, graphics processor, RAM, interfaces like USB, interfaces for audio, and more -- onto a single board. Of course, touch devices include some hardware that desktop computers don't, like touch controllers for sensing our fingers. Instead of internal power supplies, laptops and mobile devices contain batteries.

But for the most part, they're all computers -- the hardware simply comes in different shapes and sizes.