by Jonathan Strickland
Prev NEXT
5 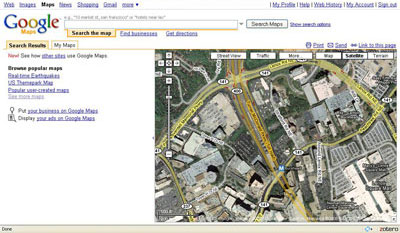 The Google Maps satellite view gives you a birds-eye perspective of cities like Atlanta, Ga.
©2008 HowStuffWorks

Google launched its online map feature in 2005, nearly 10 years after MapQuest's online debut. Like its competitor, Google Maps lets users view maps of specific regions and get directions from one location to another. Google Maps allows users to view street maps, topographical terrain maps or even satellite views. For some areas, Google also has a traffic map feature that can alert you to any snarls or bottlenecks.

The Google Maps feature relies on digital map images from NAVTEQ. NAVTEQ provides map data to many different clients, including in-vehicle navigation systems. A company called deCarta -- formerly Telcontar -- provides the applications that power the mapping features. Google employees create the applications that combine the images from NAVTEQ and the mapping capabilities provided by deCarta to create the features you see in Google Maps.

In 2008, Google added a new feature to Google Maps. Now you can get walking directions from one location to another. Previously, Google Maps only plotted out driving directions, which have to take things like one-way streets into account. Now users can find the shortest walking route between two points.

Sometimes Google's decisions don't go over as well as they had planned. Google's Street View feature for Google Maps is a good example. Google mounted special cameras to cars, then sent them through cities across the United States and France. The cameras pointed in different directions and took pictures every few seconds, giving users a street-level view of certain cities. But some people say that Google's actions violate privacy. Google responded by blurring people's faces in the photos to protect their identities.

Google Maps is closely related to the Google products suite called Google Earth. We'll look at it more closely in the next section.