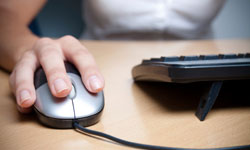 Are you Team Mac or Team PC?
iStockphoto/Thinkstock

If you were to wade into the middle of any large technology conference and shout out "Macs are whack" or "Apple rules, Microsoft stinks," you could start a riot. The conflict between Apple supporters and Windows fans has raged on college campuses, social networks and Internet message boards. It's a discussion that invites flame wars. Put on your fireproof britches, we're going to wade right into it.

Given the passion often displayed by owners of both brands, you may be surprised to learn what a small share of the global computer market Apple actually controls. While the sales of iPhones, iPods and iPads provide a strong boost to Apple's overall earnings, Macs account for less than 5 percent of computers worldwide [source: Cyran and Gu]. However, the Mac boasts an impressive growth rate: Shipments increased 27.7 percent in the first quarter of 2011 over the same period in 2010, even as overall computer shipments dropped 1.2 percent [source: Elmer-DeWitt].

So, which is better -- Mac or PC? Click through our list of 10 differences between Macs and PCs and decide for yourself.