by Clint Pumphrey
Prev NEXT
5 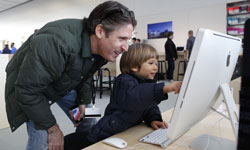 An Apple employee and his son try out the Mac computers in the kids section of Chicago's Apple Store.
Brian Kersey/Getty Images

The operating system has been a long-standing difference between Mac and PC; currently, Mac computers are preinstalled with OS X Lion, while PCs come with Microsoft Windows 7. Between 2007 and 2009, when Windows Vista was Microsoft's operating system, OS X was widely regarded as the better of the two software packages. Vista was sluggish, prone to crashing and plagued by pop-up dialogue boxes. However, Microsoft has made significant improvements in the stability and performance of Windows 7, making the current choice more a matter of personal preference in terms of functionality and layout.

A significant development in this debate occurred in 2006, when Apple announced the release of its Boot Camp software, which allows users to install Windows on their Intel-based Macs. Today, there are many programs that facilitate the installation of Windows on a Mac, including Parallels Desktop, VMware Fusion and VirtualBox. In contrast, you aren't supposed to install Mac OS X on any Windows PC. Getting Mac OS X to work on a non-Apple computer is tricky -- we call such machines hackintoshes. They tend to be unstable, and selling them is bound to get you into trouble with Apple.