by Craig Haggit
NEXT PAGE 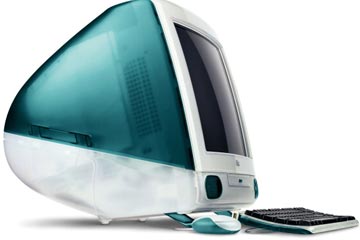 The iMac could not have come at a better time for Apple. Steve Jobs, who founded the company out of his garage in 1976, lost an internal power struggle and left Apple in 1985. By the time he returned in 1997, the company was losing cash hand over fist and fighting for its very survival. Michael Dell, CEO of Dell Computers, even suggested he'd liquidate the company if it were his call [source: Singh]. Jobs was given the job of CEO and in the coming years, he and one highly talented designer restored the company's prestige and built the iconic reputation Apple is known for today. A big reason for the change in fortune lay in a clean-looking series of machines, called iMacs, first announced on May 13, 1998 [source: Levy].

Before the iMac, Apple had limited success selling its line of PowerPCs, which were somewhat uninspired boxes looking not unlike their Windows-based competitors. While the PowerPCs weren't especially exciting, Apple nonetheless still had a loyal user base among those who prized Macs for their perceived superior graphics capabilities.

The original iMacs were totally reimagined personal computers, geared toward that relatively new phenomenon called the Web (the lowercase "i" in the name initially stood for Internet). These desktop machines incorporated simplicity and clean lines throughout their design. Their signature characteristic was the merge of the tower (that big rectangular box containing the CPU, CD drive and ports) and the monitor into one curvy unit, along with one notorious mouse that we'll look at more closely later on.

iMacs have garnered a lot of publicity for Apple over the years, though the press has not always been good. While they have more room inside than MacBook laptops, which are notorious for running hot, cooling problems persist. Initially, the small space also meant they had limited processing power. Better design and technology helped with the speed concerns, but have not completely resolved overheating issues.

The story of the iMac is a good one, so let's look at the iMac's not-so-humble origins. From the perspective of anyone outside of Apple, the original iMacs were a big risk. If the market didn't like the translucent half-egg shaped machine, Apple was toast. But they didn't need to convince everyone -- just enough people who were tired of the ugly beige boxes that were flooding the market at the time.

Could they pull it off? What was it about the iMac that pulled people back to Apple?