The iMac Grows Up 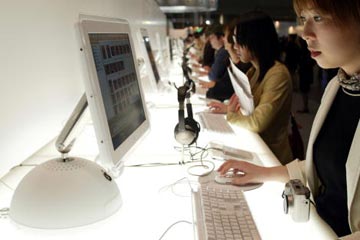 Steve Jobs allegedly wanted this version of the iMac to resemble a sunflower, but many people refer to it as the "desk lamp" iMac.
Koichi Kamoshida/Getty Images

In January 2002, Apple launched the iMac's first major overhaul. The 2nd generation iMac (the original line is now referred to as the iMac G3) sported a flat-screen monitor and turned the egg-shaped CPU on its side. The resulting design looks a bit like something out of a Pixar film, which isn't too surprising, considering Jobs spent a lot of his time away from Apple working for the animation company. The high-end version had an 800MHz processor, 256MB of RAM, a 15-inch adjustable monitor and 60GB hard drive. Very good specs at the time.

In August 2004, the iMac G5 debuted at the Apple Expo in Paris, with the machine's current look and feel. Looking more like a thick flat-screen monitor, this entry into the iMac family included side-loading disc drives and back-side ports. The monitor sized jumped by 5 inches in the high-end model, with the processor speed clocking in at 1.8GHz, 256MB of RAM, and a 160GB hard drive.

Several upgrades to the G5 line bumped these numbers higher still. The January 2006 upgrade in particular was notable in that it was the first version to use Intel processors.

With all the upgrades and versions of iMacs that have been introduced, it can get rather difficult to keep track of the family tree. If you ever want to figure out what version your iMac is, check out the support pages at Apple [source: Apple].

Since 2004, newer iterations of the iMac have focused on features rather than design. An internal camera was installed in 2006. Other enhancements included the requisite upgrades in hard drive capacity, processor speeds and RAM. Screen sizes in these years increased up to 24 inches.

There's no debating that the iMac has had a major influence on the computer industry. Other computer makers have realized that a lot of people actually do care what their computers look like. Other industries took a cue from Jobs' gift for theatrics and design too. Not long after the first translucent iMac appeared, consumers could find everything from computer peripherals to silverware manufactured in candy-colored translucent plastics.