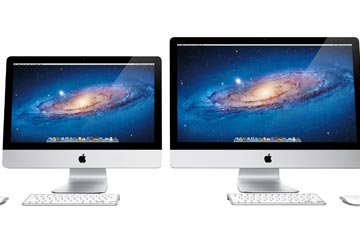 Apple released its current iteration in the iMac line-up on May 3, 2011. It continues the design scheme of a big monitor/computer combination sitting on top of a sleek stand.

Like the previous iMac, the current design is framed in an aluminum casing and is an LED-backlit display, producing a bright and crisp screen. All ports remain on the back of the machine as well, with only a DVD slot on the side. Apart from the screen and the frame, the only thing visible on the front is a small Apple logo. A larger logo on the back hides the wireless receptor.

A desktop computer that produces no heat has yet to be invented, but Apple tries to minimize the fan noise by making use of the laws of thermodynamics. Heat rises naturally, so the air intake is on the bottom through the speakers, with the exhaust venting through the top. This doesn't stop some iMacs from having overheating issues, but these do not appear to be anywhere close to universal. The official maximum temperature is 95 degrees Fahrenheit (35 degrees Celsius). The central processing unit (CPU) and the graphics processing unit (GPU) are also separated inside to prevent additional heat buildup [source: Apple].

To make the iMac even speedier, Intel and Apple collaborated to develop the much-anticipated Thunderbolt I/O technology, which we'll talk about in more detail on the next page. This technology is likely to set a new standard in the industry for communicating between computers and peripheral devices.

Today's iMacs set a high standard for speed and design. But just how fast are they?