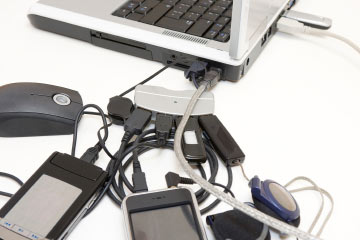 Ideally, your computer will have enough ports that you won't have to jumble all your accessories together. If you find yourself in a jam like this, consider whether or not you need all those peripherals.
©iStockphoto.com/andres balcazar

The core components we've looked at so far make up a PC's central processing power. A PC needs additional components, though, for interacting with human users and other computers. The following are the PC parts that make this happen:

Graphics components -- While some motherboards have on-board graphics, others include what's called an expansion slot, where you can slide in a separate video card. In both cases, the video components in a PC process some of the complex graphics data going to the screen, taking some of the load off your CPU. A motherboard accepts video cards based on a specific interface, such as the older AGP standard or one of the newer PCI standards.

Ports -- The word port is often used to describe a place on the outside of your PC where you can plug in a cable. Describe a port by its use, such as a USB port or an Ethernet port. (Note that the word port is also used to describe a software connection when two pieces of hardware try to communicate.) Many ports are affixed directly to the motherboard. Some of the ports you'll find on a PC include the following:

Peripherals -- Any piece of hardware that isn't mounted inside a PC's case is called a peripheral. This includes your basic input and output devices: monitors, keyboards and mice. It also includes printers, speakers, headphones, microphones, webcams and USB flash drives. Anything you can plug in to a port on the PC is one of the PC's peripherals. The essential peripherals (such as monitors) aren't necessary on laptops, which have them built in instead.

Expansion slots -- On occasion, you'll want to add components to a PC that don't have a designated slot somewhere on the motherboard. That's why the motherboard will include a series of expansion slots. The removable components designed to fit into expansion slots are called cards, probably because of their flat, card-like structure. Using expansion slots, you can add extra video cards, network cards, printer ports, TV receivers and many other custom additions. The card must match the expansion slot type, whether it's the legacy ISA/EISA type or the more common PCI, PCI-X or PCI Express types.

Now that we've looked at the parts of a PC, let's press the power button and see what makes it boot.