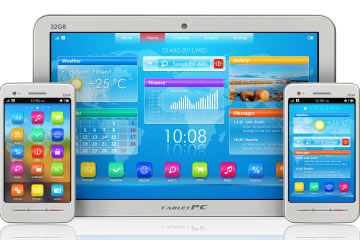 Even before the PC, computer manufacturers were conceptualizing portable computers. It was the 12-pound IBM PC Convertible that brought the laptop concept into production in 1986. Since then, laptop computers have become smaller and lighter, and their processing power has improved alongside desktop PCs [source: IBM].

Today, the computer industry recognizes other classes of mobile computers. One class, the notebook, has become almost synonymous with the laptop. The term was originally used to indicate a smaller, lighter cousin to the laptop. Another class, the netbook, is even smaller than notebooks, while also being cheaper and less powerful. The classification is probably named for its target audience: those that want a very basic interface for using the Internet.

Mobile computing goes even further than notebooks and netbooks. Many smartphones and tablets have as much processing power as notebooks, packed into smaller packages. The key differences include a smaller screen size and resolution, fewer external ports, cellular phone capability and touch-screen technology, in addition to or in place of a keyboard.

On the software side, PC operating systems are also improving portability. For example, Google Chrome OS minimizes the need for hard drive space by relying on access to Web applications and cloud storage. This means a netbook that's limited to a 64 GB solid-state drive has the potential to be as useful as a laptop with a 500 GB disk drive. Naturally, large applications that aren't Web-enabled are the exception to this space-saving advantage.

In this article, we've looked at how a PC works and where PC technology is going. One thing is certain: the PC will evolve. It will get faster. It will have more capacity. And it will continue to be an integral part of our lives.