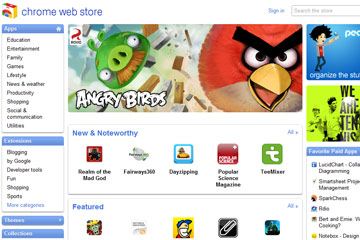 The variety of apps and extensions available in the Chrome Web Store might be just enough to push the Chrome into the top spot among popular browsers.
Stephanie Crawford for HowStuffWorks.com

Most reviews of Chrome since its first 2008 release have raved about its speed, simplicity and readiness for a Web-centric world of cloud computing. With so many positive features going for it, does Chrome have any shortcomings?

Even the hottest thing since sliced bread won't necessarily make a better sandwich. Chrome does face a few challenges. One of its most prevalent issues is getting Web site developers and Web application programmers to test for compatibility of their sites with Chrome. Leaving Chrome out of compatibility tests made sense back in 2009 when the browser was still new and had a much smaller share of Web users. Now that Chrome has over a fourth of the market, though, developers are gradually starting to make Chrome a priority. As of this writing, there are still many sites that will not render properly, will warn you about browser compatibility, or will even refuse to load at all if you're using Chrome rather than another browser.

While Chrome developers are quick to address any vulnerabilities, the browser is still coming into its own with features and functions. For example, Chrome only recently finished phasing out its homegrown project Gears as its underlying programming interface (favoring the more widely recognized HTML5 standard instead). Also, Chrome apps and the Chrome Web Store are still new with no way to predict their success or their role in boosting Chrome to the top spot in browser popularity.

Finally, Chrome's simplicity could be a double-edge sword for some users. Simplicity is an advantage for users who want a clean, clutter-free interface for browsing. It's not so great, though, for the less tech-savvy who are used to having certain toolbars and buttons in predictable locations in the interface. Though this does seem like a possible shortcoming for Chrome, the fact that IE and Firefox have followed the trend toward a simpler interface suggests it's not an important concern for most users.

Throughout this article, we've looked at the innovative features of the Chrome browser, its advantages over other Web browsers and the challenges it faces. With Chrome, Google has become a trendsetter for browser design and set a high bar for browsing performance. If you're as ready as we are to see where Chrome goes from here, browse on to the next page for lots more information about the Google Chrome browser.