Hackers and the Law 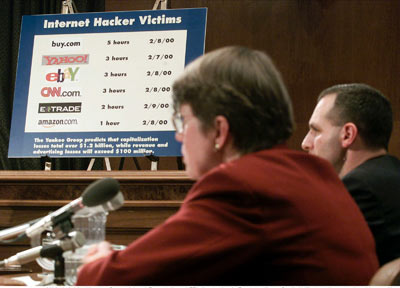 In general, most governments aren't too crazy about hackers. Hackers' ability to slip in and out of computers undetected, stealing classified information when it amuses them, is enough to give a government official a nightmare. Secret information, or intelligence, is incredibly important. Many government agents won't take the time to differentiate between a curious hacker who wants to test his skills on an advanced security system and a spy.

Laws reflect this attitude. In the United States, there are several laws forbidding the practice of hacking. Some, like 18 U.S.C. § 1029, concentrate on the creation, distribution and use of codes and devices that give hackers unauthorized access to computer systems. The language of the law only specifies using or creating such a device with the intent to defraud, so an accused hacker could argue he just used the devices to learn how security systems worked.

Another important law is 18 U.S.C. § 1030, part of which forbids unauthorized access to government computers. Even if a hacker just wants to get into the system, he or she could be breaking the law and be punished for accessing a nonpublic government computer [Source: U.S. Department of Justice].

Punishments range from hefty fines to jail time. Minor offenses may earn a hacker as little as six months' probation, while other offenses can result in a maximum sentence of 20 years in jail. One formula on the Department of Justice's Web page factors in the financial damage a hacker causes, added to the number of his victims to determine an appropriate punishment [Source: U.S. Department of Justice].

­Other countries have similar laws, some much more vague than legislation in the U.S. A recent German law forbids possession of "hacker tools." Critics say that the law is too broad and that many legitimate applications fall under its vague definition of hacker tools. Some point out that under this legislation, companies would be breaking the law if they hired hackers to look for flaws in their security systems [source: IDG News Service].

Hackers can commit crimes in one country while sitting comfortably in front of their computers on the other side of the world. Therefore, prosecuting a hacker is a complicated process. Law enforcement officials have to petition countries to extradite suspects in order to hold a trial, and this process can take years. One famous case is the United States' indictment of hacker Gary McKinnon. Since 2002, McKinnon fought extradition charges to the U.S. for hacking into the Department of Defense and NASA computer systems. McKinnon, who hacked from the United Kingdom, defended himself by claiming that he merely pointed out flaws in important security systems. In April 2007, his battle against extradition came to an end when the British courts denied his appeal [Source: BBC News].

In the next section, we'll look at some famous and notorious hackers.

Hackers who obey the law can make a good living. Several companies hire hackers to test their security systems for flaws. Hackers can also make their fortunes by creating useful programs and applications, like Stanford University students Larry Page and Sergey Brin. Page and Brin worked together to create a search engine they eventually named Google. Today, they are tied for 26th place on Forbes' list of the world's most wealthy billionaires [source: Forbes].­